Indian hyperlocal logistics provider Grab is denying claims spread by a Malaysian hacktivist group that it fell victim to a hacking attack.

Grab says its information security team is working to identify the details of the leak, including its source, and provide remediation. "We are further investigating this and will take appropriate action," the spokesperson tells ISMG.

More recently, and around the same time as the alleged Grab data leak, the hacktivist group also claimed to have hacked and defaced the Delhi government railway police website.

The Delhi government railway police did not respond to ISMG's request for information.

DragonForce Malaysia also claims to have hacked the Port of Chennai's online gate pass portal. The group says it has leaked nearly 67 megabytes of data from the port's database and posted on its Telegram channel screenshots of what it says are the port's internal database file directories.

DragonForce Malaysia says it gains initial access by exploiting a recently discovered vulnerability affecting some Atlassian Confluence servers that is tracked as CVE-2022-26134. 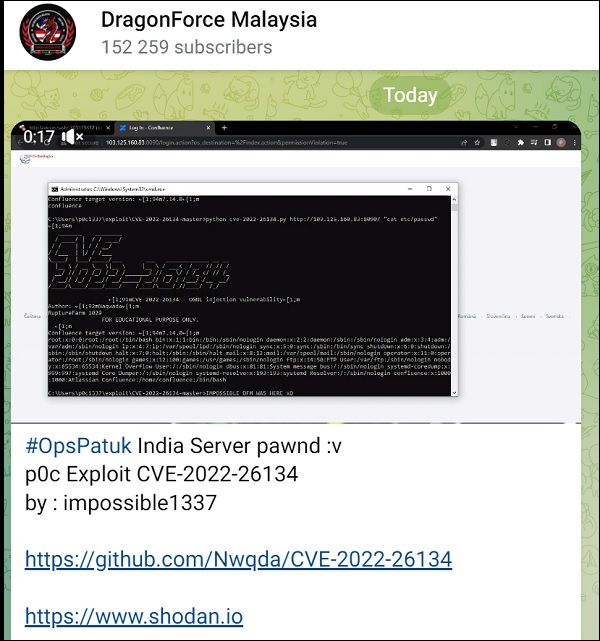 The hacktivist group says it leverages the Shodan online device search engine to find Indian organizations running on vulnerable versions of Atlassian software and then uses proof of concept exploit publicly available on GitHub to gain initial access into the victim systems.

Cybersecurity company Fortinet has also noted DragonForce's use of the Atlassian Confluence vulnerability.

The 5 Key Features of a Next-Generation Scam Solution

Palo Alto Networks is Plotted as a Leader

Panel Discussion | Securing the Open Door on Your Endpoints

OnDemand | When New Customers Are Not: Tackling Fraud in Account Opening

10 Trends That Will Shape the Fraud Landscape in 2022